Each raven faces the opposite way, so they are perfect for adorning altars, bookcases, or whatever else.

Mythical Lore of the Raven

Ravens are often depicted in ancient mythologies throughout the world. They can appear in different ways, sometimes showing themselves as omens, while at other times they may show themselves as divine.

Odin, a god from the Norse pantheon was often depicted alongside a pair of ravens, whose names were described in the Eddas as Huginn and Munnin. They were considered Odin’s spies into the human realm. Their names translate to ‘memory’ and ‘thought’.

In the Mabinogion, a collection of Welsh myths, ravens were considered bad omens, and it was believed that they brought around suffering and demise. Sorcerers, and other magic users in the myths would often turn themselves into ravens to avoid capture.

In Native American lore, there were varied beliefs about ravens. Some tribes believed ravens could steal souls, but other tribes considered them to be simple tricksters. Many Native American tribes avoided ravens. 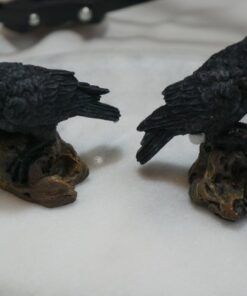