Ceremonial drums were popularly used for practice of medication, drum circles, ceremonies and even as decoration for modern homes. This traditional drum ceremonial is made from natural skin covering and has been crafted by hand. The mallet is handmade and has been wrapped by skin using the suede cord and there are two feathers attached to it. Indigenous people across the world have been using the drum ceremonials in a very ritualistic context. It is accompanied often times with chanting and singing in big groups of people.

Ceremonial drums are used to produce powerful rhythms and prolonged music. The positive effects of the rituals using these drums are far and wide. Playing the drums were traditionally believed to reduce the level of stress, create social support, placebo effect, encouragement of pro-social behavior, and even psycho-dynamic growth. It was believed to be equal to meditation, integrating a mode of consciousness. Although these drums were not used as an alternative to cure diseases, it was used in ceremonies to address the aspects of sicknesses and sufferings that are not addressed by bio-medicine. It is now used as a complementary and alternative mode of medical practice. Ceremonial drums are usually associated with healing rituals.

• Ceremonial drums are used by indigenous inhabitants in ritualistic contexts across the world.
• Commonly used as a decorative piece around the house.
• Used in drum circles and traditional ceremonies.
• This ceremonial drum has been crafted by hand.
• It is covered in natural skin to produce authentic and clear sound.
• Natural skin creates vibrations that has healing effects.
• Mallet is also made from hand and covered in natural skin.
• Mallet also features a suede cord with a pair of feathers attached to it.

Be the first to review “Ceremonial Drum” Cancel reply 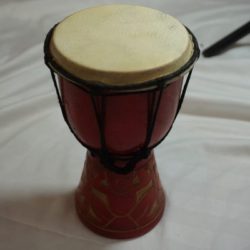 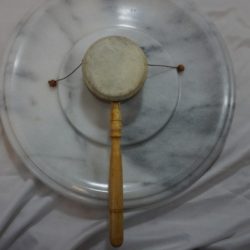